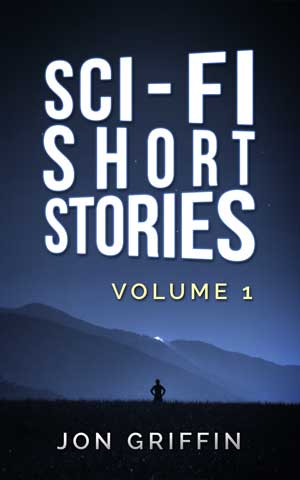 A collection of short science fiction stories by Jon Griffin.

In 2061, commuters shuttle from New York to the moon as easily as people once boarded a train. With eleven daily transits, it’s business as usual. This flight is special, but why?

Sergeant Desh Arld Neck is months from retirement, having served the NYPD for 20 years. He’s in the middle of an AA meeting when he gets a call. It’s urgent. Something has gone very wrong, and he must get back to the precinct. Now.

The moment he spots the mayor and police commissioner, he knows this is no ordinary case. Not good, and, what does Galim Jerin have to do with space?

Stranded on a planet light-years from earth, three children run out of food. They only know the rain. 10,000 days of it and someone has to leave the pod or they all die.

I used to lead a normal life… until I turned ten. Then they showed up.

That night haunts me to this day.

Now, at thirty-two years old, I leave some unknown town yet again. Then they do the unthinkable. Lucky for me I have an ally.

Hal Steadman works for the CIA. He knows how to kill people and how to get rid of the bodies.

He failed his mission in Eastern Europe, and has to pay the price. Small town Texas is the currency. You learn a lot at The Farm, but playing a US Marshal?

They never told him what he was protecting, but an accident reveals the truth… and it isn’t good.

Phillip Carmichael hit rock-bottom. Time to get out of town. Reno sounds good.

On his way he encounters a mysterious storm that envelops him. Emerging from the storm he finds himself at the edge of deserted town, in a different time. Time travel isn’t possible… is it?

Will he find what he wasn’t looking for, or exactly what he needs?

Sign up for my newsletter and get a free book!